The mixing truck is composed of a vehicle chassis and a special device for concrete mixer trucks. The chassis of mixer trucks on the market mostly adopts the second-class general chassis provided by the vehicle manufacturers. Its special mechanism mainly includes the structure of the mixing drum, the loading frame, the feeding, discharging, operation and hydraulic systems. The power of the chassis of the car is taken out through a power take-off device, and the variable pump of the hydraulic system is driven, and the mechanical energy is converted into hydraulic energy to be transmitted to a fixed amount of motor. Let's take a closer look at the structure of the mixer truck and the corresponding maintenance measures.

The mixing tube is the core of the entire upper part.It has high technical content, small tolerance range, high precision requirements, and residual performance.It also directly affects the quality of the premixed mixer.If the design is not properly manufactured, the blade is double-log The spiral line is the theoretical basis. After actual testing and simulation correction, the current blades with fast feeding and discharging performance, low residual rate and ensuring the quality of ready-mixed concrete are formed. The stirring blade can prevent and help improve the discharge performance of the concrete. There are holes in the blade at the front of the outlet, which can reduce the adhesion of the concrete to the blade and improve the uniformity of the discharge. The sliding angle of the bottom of the mixing cylinder is continuously increased to ensure that the blades fully stir the concrete and reduce the residual rate.The production of the mixing cylinder is made of integrated external card and internal support. The requirement of the coaxiality of the reducer axis and the raceway axis is guaranteed. Make the whole vehicle run smoothly and comfortably, and the load impact force is small. The material of the mixing tube is a wear-resistant high-strength steel plate. After the shape of the mixing tube is formed, the inner support is removed and the blades are welded. The blade material is made of high wear-resistant 16Mn steel material, the wear resistance of the blade is increased by 15%, the double logarithmic variable pitch design, the mixing quality and the discharge speed are perfectly balanced. The welding process uses carbon oxide shielded welding. After the mixing cylinder is manufactured, it is shot peened to eliminate the stress generated during welding and manufacturing, and also increase the adhesion of the paint. After the final pre-installation of the upper body part, the whole process of shot blasting, rust removal, sanding, painting and baking is performed.

The frame system is divided into front seat, rear seat and auxiliary frame. The beam type of the upper sub-frame is front and rear through-holes. It adopts a fully-enclosed rectangular tube structure or a steel plate pressed into a groove shape. All materials are made of 16Mn steel. The chassis has the advantages of high strength, small deformation, and good stability.

The maximum size of the most hopper is 1075 × 1075, the single side is flat, and the remaining three sides are curved funnel shapes. It is locally strengthened in places where it is easy to wear. Because of its large internal space, it is easy to remove the residue at the inlet of the mixing drum, and its design angle is reasonable, so that the feeding speed is accelerated, and the phenomenon of blocking and jamming is not easy to occur.

The discharge chute can rotate 180 ° in the horizontal direction, and there is a limit device every 20 °. The compression spring type is used in the vertical direction, which can be lifted and lowered freely, so as to meet the requirements of different working conditions. The whole chute is divided into two parts, the main chute and the auxiliary chute. The most susceptible parts on the main chute are locally strengthened. The optimized design of the discharge chute is conducive to improving the flow performance of the concrete and the discharge speed. The discharging chute is provided with a locking device, which is fixed and locked during the running of the vehicle to ensure safe and reliable driving.

The operating system adopts a rod control system with accurate positioning and reliable control. The control points are divided into three parts: the cab and the two sides of the rear of the car. The operating lever in the cab can also control the steering of the mixer drum to ensure that the mixer drum is in an agitated state during vehicle driving. The entire control system has a compact structure, flexible operation and reliable control.

The hydraulic driving method uses a manual servo variable axial piston pump, a fixed piston motor and a reducer to form a closed hydraulic transmission system, which can be stepless forward and reverse speed change, and it is easy to adjust and control. The large-capacity oil tank set in the hydraulic circuit not only plays a role of storing oil but also radiating heat, so as to ensure normal work at an ambient temperature of -20-50 °. The reducer is directly connected to the bottom of the mixer.The output shaft connected to the reducer can be deflected within ± 6 °, which can compensate the displacement of the axis of the mixer, and ensure that the drive of the mixer is not distorted during the driving process of the car. Impact.

The water supply system adopts gas-type water supply. The compressed gas passes from the main tank of the main vehicle through a single-circuit protection valve, air source switch, pressure reducing valve, and one-way valve to the pressure water tank. The water in the water tank is pressed into the water pipe. The pressure reducing valve can be adjusted freely in the range of 00.3Mpa. The water tank has a capacity of 350 liters and is equipped with a hose and a flushing device for easy flushing. 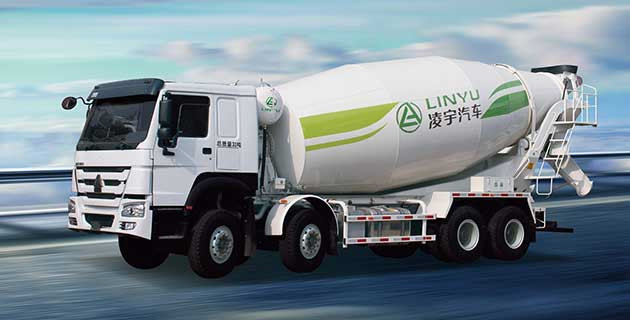 There should be no leakage of slurry between the concrete inlet and the mixing drum. Generally, the gap between the inlet and the mixing drum is not more than 5mm. If the slurry leaks, it should be repaired according to different models, some of which are replaced with wide rubber bands and some are welded with thin steel plates, the size is larger than a half circle.

During the oil change, the first oil change time is performed after 500 hours of pick-up work, and the second and subsequent oil change intervals should be about one year; it is worth noting: each oil change must be run only when the operating temperature is reached. After replacement, the sealing performance of the entire system must be checked after each oil change, and all bolts, drain plugs and hose connections must be re-tightened. It should also be noted here that when removing any part of the hydraulic system, the interface should be sealed immediately. To prevent dust from entering.

The above is all about the mixer truck. Only by knowing the structure and maintenance of the mixer truck in detail can you drive safely and extend its service life to a certain extent.

How to properly operate a concrete mixer truck